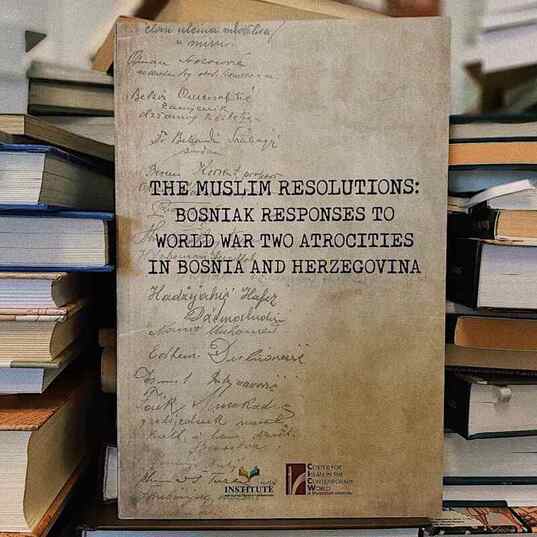 The CICW announces a new publication, co-published with the Institute for Islamic Tradition of Bosniaks in Sarajevo, Bosnia and Herzegovina, co-edited by Hikmet Karcić, Ph.D., Fikret Dautović, Ph.D., and Ermin Sinanović, Ph.D.

​The book covers "the Muslims resolutions" in 1941, i.e., the Bosniak elites' condemnation of the Nazi-puppet regime's policies: using it as an opportunity for seeking Bosnia's autonomy, hoping in this way to improve the country's position and the security of their people. They did so through the resolutions included in this book, which were initiated and signed by members of the Bosniak establishment, the clergy and the judicial and economic elites, who sought to distance themselves from the Ustaša regime. This regime had established a puppet state called “The Independent State of Croatia” (Nezavisna država Hrvatska or NDH), led by Ante Pavelić, the Poglavnik. In the NDH, the Ustašas introduced Nazi-style laws against Serbs, Jews, and Roma and established concentration camps, where they incarcerated and murdered members of those peoples. The most infamous of them was Jasenovac. The Ustašas had considerable autonomy and were brutal in their genocidal campaign, the aim of which was to exterminate those considered racially inferior.

Most of the people to actually sign these resolutions were members of El-Hidaje, the Association of Muslim Clergy. The resolutions played a large role, not only during the war but in the post-war era too, as the struggle for Muslim identity and nationhood got underway. They are one of the few cases in the region, perhaps the only, of such atrocities being condemned and criticized by the elite of a "people without a state."​