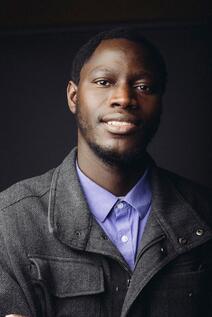 With funds from Shenandoah University’s Center for Islam in the Contemporary World, Macodou Fall, a PhD student at the Department of Religion of the University of Florida, traveled to Senegal and conducted preliminary research for his dissertation project, “Daairas and their Impacts on Islamic Learning among Mourides in Senegal.” Macodou is interested in the study of Islam, Ajami literature, and Islamic popular culture in West Africa with a focus on the Senegalese Sufi order, Muridiyya. His research project seeks to explore the Mouride urban organizations’ (Daairas) various teaching methodologies, which also include singing, praise singing, and the interpretation of Mouride qasida via the use of Ajami Wolof.

In Senegal, Macodou visited religious sites in Dakar and Touba, attended a couple of religious events organized by urban Mourides, as well as interviewed members of other urban religious organizations, which do not only include Mourides, but also the Yalla-Yalla–a different Sufi group.

In Touba, which is the Mouride order’s holy city, he had the privilege to be accompanied by a Ousmane, a Mouride who guided him through Shaykh Makhtar’s so-called modern Quranic School (Daara) in Darou Rahmane, a quartier that is right at the entrance of Touba. In this Daara, a compound that is inside the marabout’s house, the taalibes (disciples) are interned and fed by the marabout who receives inquiries from Mouride parents wanting an Islamic education for their children.

In Dakar, Macodou visited the Daaira Jaalibatoul Marakhib, an urban religious organization that is sponsored by the same marabout and located at the Parcelles Assainies region of Dakar. In this Daaira, Macodou was interested in its internal organizations with the different committees that work to manage the daairas’ various activities, which range from the teaching of the Quran to the mastering of Amadou Bamba’s qasidas through singing and the use of Wolof Ajami literature.

Macodou also visited another Mouride Daaira, Wilaaya, which its members claim to be the first ever-created Mouride Daaira. They have different branches around Senegal and the diaspora and Macodou went to one the Dakar section’s gathering on July 3.  Adding to that, Macodou also went, before its opening, to the Mourides’ new mosque in Dakar (Masaalik-al-Jinaan) to see the work members of Daairas Maam Jaara Busa and Sopey Jumaa-Ji have been doing in terms of initiating their adherents to the Quran and the Sufi order’s ideology as well as organizing events.

This is an ongoing project, which will need more fieldworks to fully grasp the activities within the daairas, but  these recent visits helped Macodou to narrow his project to analyze the daairas’ organization and internal system of knowledge distribution and how they are reflexive of the Mouride traditional Quranic schools.
​
Macodou is very grateful for this travel grant, which tremendously helped to defray the cost of his flight ticket and part of the living expenses in Senegal.
Photos courtesy of Macodou Fall
Macodou Fall is a doctoral student in religious studies at the University of Florida. He holds a B.A and an M.A in English from Cheikh Anta Diop University in Dakar and an M.A in African Studies from Ohio University. Macodou is interested in the study of Islam and popular culture in West Africa. His research project seeks to explore the history and progress of Islamic learning in Senegal with a focus on the Mouride urban organizations’ (Daairas) various teaching methodologies, which also include singing and the interpretation of Mouride texts via use of Ajami Wolof. Languages: Wolof, French, English, Arabic.